No thanks
Continue
Whoops!
Your free trial of Curious+ has expired
Person, Place, or Thing
Our encyclopedia of the odd and awe-inspiring.
Previous Next
April 7, 2019
1 CQ
Thing: Palomares incident 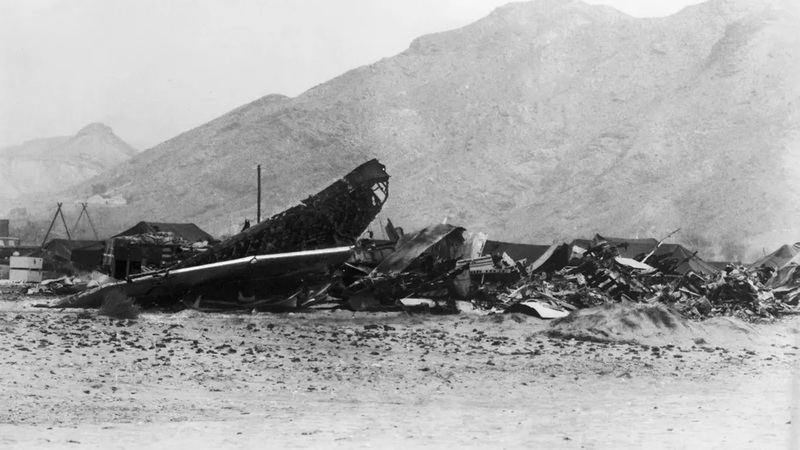 A U.S. air force bomber explodes over the coastline of Spain—with four hydrogen bombs in tow.
It's a bird... It's a plane… it's an international relations nightmare! On January 17, 1966, the citizens of Palomares, Spain, looked on in wonderment as wreckage from a Boeing B-52G Stratofortress bomber rained down from the sky. Unbeknownst to the locals, legions of military personnel were bearing down on their quaint seaside town to conduct a massive search that would last until April 7, 1966. Their target? Four missing hydrogen bombs.
The Palomares incident began on a normal day; as normal as the Cold War permitted. A B-52 bomber commanded by Captain Charles Wendorf was patrolling the skies near the border of the U.S.S.R. as part of Operation Chrome Dome. The operation, managed by the Air Force's Strategic Air Command, had bombers patrol the skies in constant shifts. That way, if a nuclear war should ever break out, the U.S. would have its bombers primed to strike at the Soviets.
In order to patrol around the clock, B-52 crews refueled their planes in midair. Bomber pilots nosed their B-52 underneath a KC-135 Stratotanker, which pumped the bomber full of fuel via a boom, or fueling tube. But on January 17, 1966, something went horribly awry. As Wendorf tried to position his B-52 beneath a tanker, the bomber came in too hot and rammed into the KC-135. Fuel splattered both planes. Wendorf and three of his men managed to eject as an explosion consumed both aircraft, along with seven other air force personnel.
Debris from the planes fell upon Palomares, with one witness recalling a "huge ball of fire." Though no civilians were killed in the immediate crash, four Mark 28 thermonuclear weapons, each 70 times more powerful than the bomb dropped on Hiroshima, had been ejected from the explosion and dispersed radioactive plutonium particles across the landscape. The U.S. military quickly dubbed these missing bombs "broken arrows," and, with the cooperation of Spanish dictator Francisco Franco, flooded the locale with search parties.
Miraculously, none of the nukes had detonated. Three were quickly located on land, but the final fourth was missing. Troops wielding Geiger counters, or radiation-detecting instruments, turned over every stone before finally concluding that the weapon must have plunged into the Mediterranean Sea. Soviet figureheads remarked, with glee, that the U.S. was going to be held responsible for the contamination of the entire sea. As Spanish citizens began holding demonstrations, U.S. Ambassador Angier Biddle Duke headed a publicized "swim party" where he splished and splashed in the Mediterranean, telling reporters, "If this is radioactivity, I love it!"
Nevertheless, the Navy trawled Palomares' coast with an armada of ships and submarines. The U.S. refused to officially admit that it was searching for a missing nuke until the Navy finally located the bomb five miles off the coast, 2,500 feet underwater. Military engineers attempted to hoist the weapon out of the water on March 26, but the cable snapped. Their second attempt succeeded, with the USS Petrel winching the nuke from the water on April 7, 1966.
The Palomares incident certainly could've ended much, much worse, but it still resulted in tragedy. Some 650 acres of Palomares countryside was blanketed in radiation, and the U.S. had to extract 1,400 tons of contaminated soil. Despite the effort, radiation testings in 1990 showed that the area remains irradiated. In 2015, the U.S. and Spain, represented by Secretary of State John Kerry and Spanish Foreign Minister Jose Manuel Garcia-Margallo, reached an agreement for the United States to conduct another cleanup operation, which is still in the works. As the Air Force's Strategic Air Command would say: it's all radioactive water under the bridge, right?
Image credit & copyright: Keystone-France/Getty Images