No thanks
Continue
Whoops!
Your free trial of Curious+ has expired
Person, Place, or Thing
Our encyclopedia of the odd and awe-inspiring.
Previous Next
March 24, 2019
1 CQ
Thing: Tuberculosis 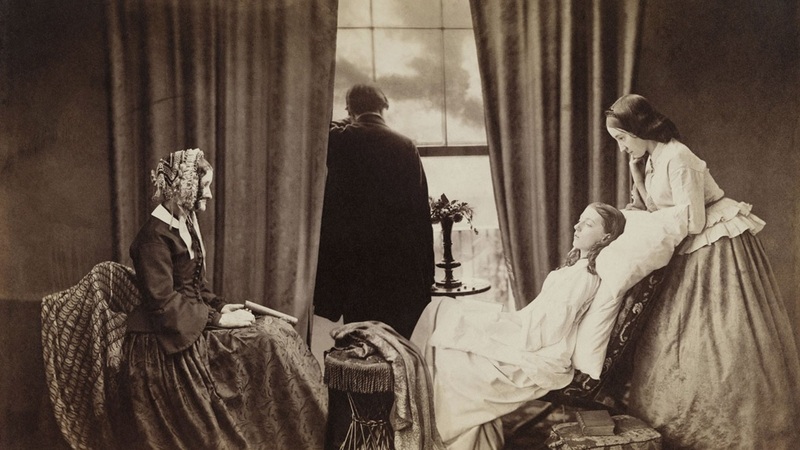 A "romantic" disease terrorizes Victorians—and renders them drop dead gorgeous?
Beauty was only lung-deep in the 19th century, thanks to a pulmonary disease known as Mycobacterium tuberculosis. A deadly epidemic, tuberculosis oddly developed a "romantic" reputation for the way it gradually drained the life from victims, leaving them fair skinned, trim, and with a natural blush. Physicians even believed that it targeted beautiful people—until Dr. Robert Koch announced his discovery of tuberculosis's bacteria on March 24, 1882.
Tuberculosis, or TB, infects its hosts by attacking the lungs, as well as the neck, lymph nodes, and other organs. It spreads easily, through airborne droplets propelled through the air by sneezing and coughing. Prior to modern treatments, victims slowly wasted away. They grew pale, waifish, and rosy in the cheeks and lips; and upon closer inspection, their eyes dilated and sparkled—symptoms of frequent low-grade fever.
The scourge has been around for millions of years. Known as phthisis in ancient Greece and schachepheth in ancient Hebrew, TB began striking humans at least 9,000 years ago in Atlit Yam, off the coast of modern-day Israel. Classical thinkers like Hippocrates and Aristotle long speculated about its source. Aristotle believed TB was somehow connected to maladies afflicting pigs and oxen, which shared matching symptoms. Indeed, various mutations of TB affect the majority of other mammals, including cattle and bison.
By the 19th century, TB—then known as "consumption"—was killing one in seven people in the western world and playing havoc on human imaginations. Some physicians of the 1800s suggested that the illness was caused by miasmas, or "bad airs," and that the first family member to contract it turned into a vampire. Other experts believed TB was hereditary, and that beautiful people were more susceptible to catching it—making the "noble" illness a status symbol. After all, Victorian preferences for fair-skinned beauty mapped on perfectly to TB's physical effects.
Before long, dour Victorians were romanticizing the disease. Women yearned for it so they could attain hourglass figures, sultry red lips, and ivory skin. After all, they already wore pointed corsets to strangle their waists and applied makeup to disappear the healthy color in their faces. Romantic poets and artists who frequently preoccupied themselves with madness, melodrama, and illness also became fixated with TB. English poet John Keats famously died of the disease in 1821; shortly after, in 1849, English novelist and poet Charlotte Brontë wrote, "Consumption, I am aware, is a flattering malady." Italian composer Giuseppe Verdi's even based his 1853 opera La Traviata off of real-life Parisian celebrity and TB victim Marie Duplessis.
During this strange time, French chemist and microbiologist Louis Pasteur was struggling to sell the public on his germ theory: the idea that microbes cause diseases, not miasmas. German physician Robert Koch encountered Pasteur's innovative germ theory in the 1860s while attending medical school at the University of Gottingen, where he studied TB. Koch drew the attention of the Imperial Health Bureau in Berlin, and he managed to discover and isolate Mycobacterium tuberculosis in its laboratories in 1882.
Upon Koch's discovery, germ theory became a proven household term; and it was now commonly accepted that TB did not gravitate to "elegant" people. All romanticization of TB went out the window with this revelation. Women raised their hemlines because dresses were believed to sweep up floor germs. As hemlines got shorter, shoes became increasingly more important in female fashion. Meanwhile, men rushed to shave their beards after an American doctor publicly argued that germs were "transmitted via the whisker route." Sunbathing became popular because of fair skin's new association with microbial illness.
Tuberculosis rates fell, and in 1921, French bacteriologists Albert Calmette and Camille Guérin produced a vaccine. Since then, skin and x-ray tests have been developed to diagnose TB, and March 24 is designated World TB Day to inform the public about the lingering malady. Though TB is in recession, the World Health Organization estimates that 1.6 million people still die of it annually and that 1.8 billion people are infected with the bacterium that causes it. Meanwhile, more and more evidence is revealing that tanning can lead to skin cancer. It seems, whichever way we cut it, that looks can kill.
Image credit & copyright: Henry Peach Robinson