No thanks
Continue
Whoops!
Your free trial of Curious+ has expired
Person, Place, or Thing
Our encyclopedia of the odd and awe-inspiring.
Previous Next
February 24, 2019
1 CQ
Thing: The Travis Letter 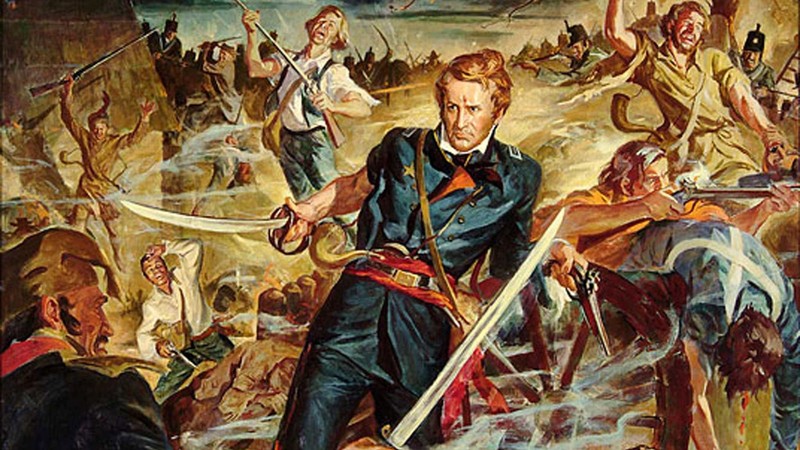 Remember the famous stationary.
Few historical documents inspire as much American patriotism as the Travis Letter and its infamous "Victory or Death" closing valediction—even though the letter wasn't even technically written in the U.S. At the time Commander William B. Travis wrote the letter, dated February 24, 1836, the Texas-secessionists seemed much less concerned with patriotism than posturing with military strength.
In 1821 the First Mexican Empire declared independence from Spain and made efforts to bolster its population in the Texas territory (then called Coahuila y Tejas). American empresarios, or contracted settlers, were granted land contracts to give out to good citizens; U.S. immigration to the region swelled, quickly increasing the population from 500 to 30,000. Efforts like the Law of April 6, 1830, were made to regulate migration and the slave trade but didn't stop people like William B. Travis, who—in an effort to escape his mounting debt in South Carolina—ignored the legality of his move to Texas in 1831.
Travis was initially denied a land contract as he established his law practice in Anahuac, Texas; he eventually caught up with Texian-secessionists and established a militia to oppose anti-immigration laws and Mexican rule. In a series of clashes called the "Anahuac Disturbances," Travis gained folk hero status among local Americans. His favor with Texians didn't last for long, though: in 1835, Travis led a group of 25 men to successfully capture Mexican soldiers lead by Captain Antonio Tenorio. The attack came during a time of high-tension with Mexican officials, who were arresting Texian leaders they suspected of insurrection. As a result of acting without community support, Travis was forced to apologize for his military efforts.
By February 23, 1836, the President of Mexico, General Antonio López de Santa Anna, marched to Béxar County in Texas, aiming to end the insurgency once and for all. Travis and fellow commander James Bowie escaped to the old Alamo, hunkering down with about 100 troops to Santa Anna's 2,100. It was there where Travis' flair for the dramatic found its purpose in his famous letter. "I call on you in the name of Liberty, of patriotism & everything dear to the American character, to come to our aid, with all dispatch," he wrote, "If this call is neglected, I am determined to sustain myself as long as possible & die like a soldier who never forgets what is due to his own honor & that of his country." Travis' call to American arms was especially curious because, unbeknownst to him, "his" country was technically not the United States but the Republic of Texas—which had declared independence from Mexico on March 2nd while he was holed up at the Alamo. Also, the clearly outmanned Travis had had a perfectly viable opportunity to surrender to Santa Anna just days before the end of the siege and his eventual death on March 6th.
The Travis Letter did nothing to prevent the fall of the Alamo to Mexican forces. But it made it to San Felipe, where copies were made, and word got out to local—then national—newspapers by early March. At the Battle of San Jacinto, fought less than two months later, Texians forces prevailed over the Mexican army with cries of "Remember the Alamo!" On July 8, 2014, the original Travis Letter returned to the Alamo—now in the United States that Travis once implored—after leaving 178 years ago.
Below: pages from the Travis Letter. 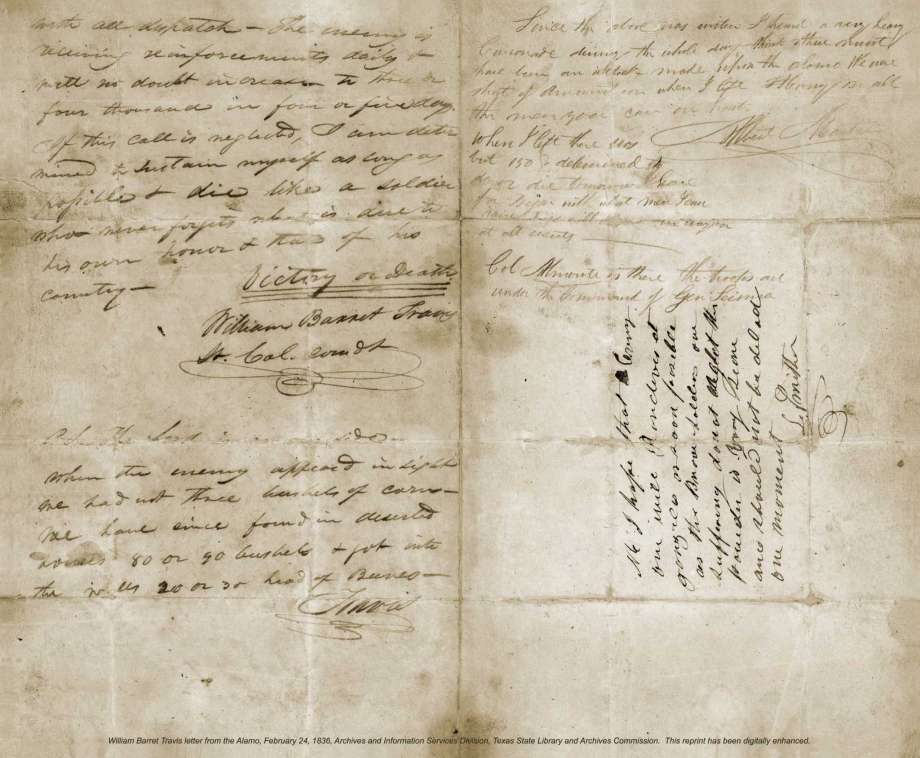