No thanks
Continue
Whoops!
Your free trial of Curious+ has expired
Person, Place, or Thing
Our encyclopedia of the odd and awe-inspiring.
Previous Next
March 3, 2019
1 CQ
Thing: Comstock laws 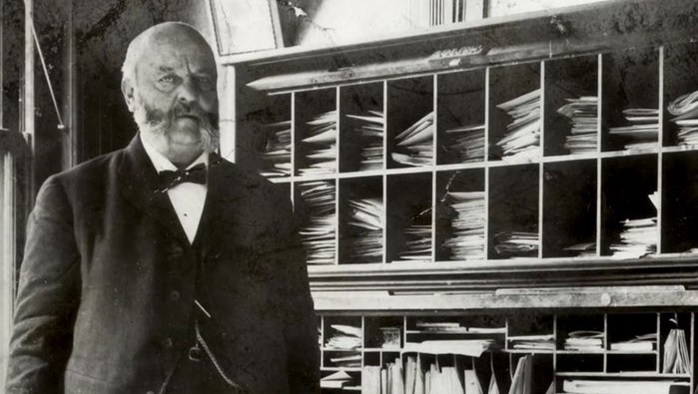 A man's vision of a wholesome society quickly turns unconstitutional.
Obscene! Lewd! Amoral! United States Postal Inspector and politician Anthony Comstock bristled as he walked the streets of 19th-century America. A self-styled "weeder in God's garden," he took it upon himself to keep Americans supremely chaste, convincing Congress to pass his infamous Comstock Laws on March 3, 1873. The statutes, now deemed unconstitutional, prohibited the mailing of contraceptives, abortifacients, and any—ahem—dirty objects.
The story begins with Comstock: a righteous man. Some might say, too righteous. Born in the countryside of New Canaan, Connecticut, Comstock grew up deeply religious and detested everything from alcohol use to "the birds and the bees." During his service as a Union officer in the Civil War, he openly objected to his fellow soldiers' cussing; upon his demobilization, Comstock moved to New York City in the 1860s to work at the Young Men's Christian Association.
But when he arrived at the Big Apple, Comstock was appalled. Throngs of prostitutes prowled every corner, their lustful ankles exposed below the hem for all to see (or so he believed). Grumbling and scowling, the most honorable veteran also stooped to find pornography littering the streets, only to scamper away shielding his scalded eyes. And to top off the cesspool of sin, Comstock learned New Yorkers were practicing safe sex with early prophylactics—and using ingestible abortives to save parenthood until they were ready for it. Foul—most foul!
The zealous moralist launched a crusade against sin by forming the New York Society for the Suppression of Vice in 1873. The proselytical institution brought Comstock publicity with its visions of infernal damnation, and convinced Congress to pass the Comstock laws before hiring on Comstock as United States Postal Inspector. As snail mail inquisitor, he saw that anyone attempting to ship obscenities, contraceptives, abortifacients, or other indecencies would "be fined not more than five thousand dollars, or imprisoned not more than five years, or both."
These initial statutes lead to a string of others at the state and district levels, including a much stricter ban on the possession, purveyance, and usage of obscene items in the District of Columbia. This drew the ire of feminists Margaret Sanger and Emma Goldman, and as Comstock busied himself with shutting down the despicable Louisiana Lottery and destroying troves of books—the "feeders of brothels"—his enemies formulated a strategy to derail his crusade. Namely, pointing out there was no underlying definition, framework, or test to show what qualified as "obscene."
In 1916, a year after Comstock died, authorities arrested Sanger for opening the first official birth control clinic in America. Thanks to her nuanced defense, the ensuing case resulted in the 1918 Crane decision, which made therapeutic "birth control" advice legal—though not abortion. More political maneuvering by Sanger later resulted in the 1936 U.S. Circuit Court of Appeals decision, United States v. One Package, which allowed doctors to ship contraceptives across state lines. Eventually, all vestiges of Comstock's laws faded, particularly with the landmark decision in Roe v. Wade that legalized abortion in 1973.
Today, the U.S. Supreme Court relies on the "Miller test" to determine what is obscene. Created in the wake of Miller v. California (1973), the test considers any subject that lacks "serious literary, artistic, political, or scientific value" and "taken as a whole, appeals to prurient interests" as an obscenity unprotected by the First Amendment. Which means book burning and bans on essential feminine products are all unconstitutional. Sorry Comstock, but it turns out proper Americans value their freedom most of all.


More about this Curio:
PBS: "Anthony Comstock's "Chastity" Laws"
The Washington Post: "'Sex and the Constitution': Anthony Comstock and the reign of the moralists"
TIME Magazine: "This Is What Americans Used to Consider Obscene"
Encyclopaedia Britannica: "Comstock Act"