No thanks
Continue
Whoops!
Your free trial of Curious+ has expired
Person, Place, or Thing
Our encyclopedia of the odd and awe-inspiring.
Previous Next
March 16, 2018
1 CQ
FLASHBACK | Person: Giovanni Giacomo Casanova 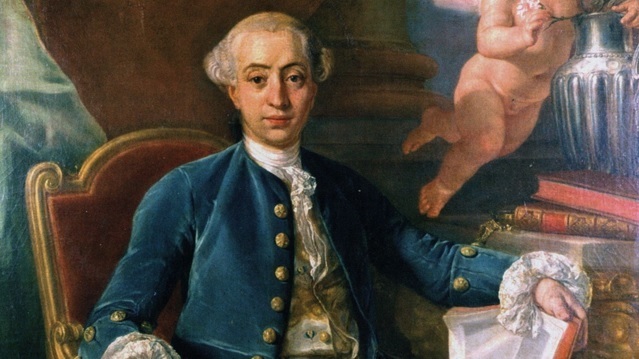 It's Flashback Friday! Enjoy this favorite from the Curio Cabinet archives. The world's most notorious playboy may deserve a little more credit.
Giovanni Giacomo Casanova was sentenced to five years of imprisonment on this day in 1755 for gambling and blasphemy. But of course he was: he was Casanova, after all, the dissolute philanderer who wooed over 120 women, from milkmaids to nuns to countesses—and a few men as well. But there's more to Casanova than meets the eye.
Casanova was born in Venice in 1725 into a family of actors. A sickly child prone to frequent nosebleeds, he was sent to another Italian city to improve his health. It was in the city of Padua where an 11-year-old Casanova had his first sexual encounter with a priest's sister, an experience he recalled fondly in his memoirs, and which he credited with sparking his lifelong obsession.
By the time Casanova returned to Venice, his wild side had been formed. However, many don't know that Casanova also had a sweeter side: His twelve-volume memoirs are both an account of his exploits and a love letter to women, with Casanova writing at length of his appreciation of women's personalities and intelligence. "Without speech, the pleasure of love is diminished by at least two-thirds,'' he wrote. Casanova stayed in touch with former lovers and respected his paramours' privacy, going to extreme lengths to conceal the names of women he slept with.
Later in life, Casanova worked as a spy and librarian. He struck up a friendship with French philosopher Voltaire in 1760, debated with Benjamin Franklin, and was asked to help Mozart with his opera Don Giovanni. He even worked on a translation of the Iliad. And as part of an amnesty deal for his bad deeds, he spied for Venetian inquisitors from 1774 to 1782 in order to return from exile to his hometown of Venice.
Casanova's sensitive and intellectual sides were buried in history until recent years, when the full manuscript of his twelve-volume, 3,500 page memoirs resurfaced. Scholars consider his memoirs an authoritative account of life in 18th-century Europe. Casanova moved from city to city to escape his debts, living in Paris, Prague, Vienna, and Dresden. The upside of this instability was that he documented life in several parts of Europe at a time when most people never traveled farther than 50 miles from their birthplace. So, we're sort of glad this playboy got around—we just wish his memoirs didn't go into so much detail.


More about this Curio:
Biography: "People: Giovanni Giacomo Casanova"
Smithsonian Mag: "Who Was Casanova?"
New York Times: "Learning to Love a Lover; Is Casanova's Reputation as a Reprobate a Bum Rap?"