No thanks
Continue
Whoops!
Your free trial of Curious+ has expired
Person, Place, or Thing
Our encyclopedia of the odd and awe-inspiring.
Previous Next
March 14, 2018
1 CQ
Person: Joe Dimaggio 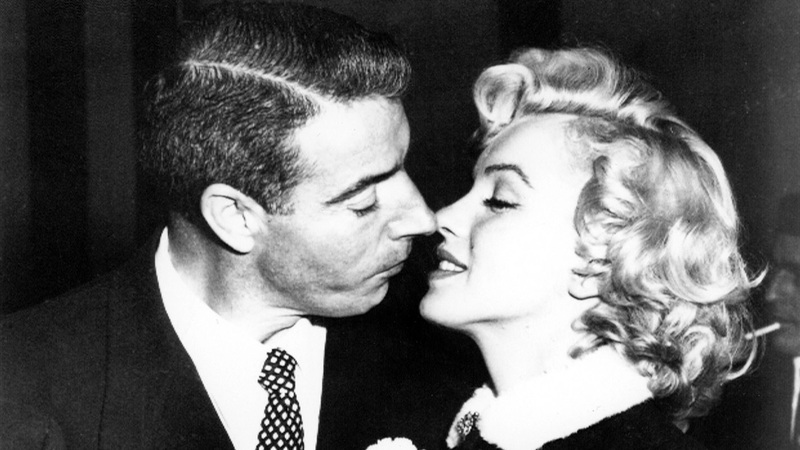 A beast on and off the field.
"I think there are some players born to play ball," Joe "Joltin' Joe" Dimaggio once said. Indeed, he was one of them. Dimaggio, who died last weekend in 1999, still holds the Major League hitting streak record he set in 1941, having landed a hit in 56 consecutive games. But sadly for the women Dimaggio loved, he swung on and off the field with equal fervor.
Born into a family of poor Sicilian immigrants in San Francisco, Dimaggio matured into his generation's most famous baseball player—a spry outfielder with formidable batting skills. He started and ended his 13-year career with the Yankees, winning nine World Series championships. And because it was the so-called Golden Age of Baseball, he was also celebrity off the field—practically royalty.
As a highly-desired bachelor, Dimaggio sank his teeth into a decadent nightlife. In 1937, he met the beautiful actress Dorothy Arnold on a film set. The two fell in love and were married by 1939, Arnold foregoing her dreams of Hollywood. Dimaggio, however, could not relinquish the nightlife, even when Mrs. Dimaggio birthed his only child, Joe III. They divorced in 1944.
From there, Dimaggio's behavior only worsened. He managed to finagle a dinner date with Marilyn Monroe, and the two married in 1954. But he was in for a rude awakening. Unlike with Arnold, there was absolutely no way Monroe would become his doting housewife. Her sex-symbol persona bowled him over, and he became jealous—even violent.
During the filming of Monroe's iconic subway vent scene for The Seven-Year Itch, Dimaggio turned animalistic. On set in a busy New York street, 5,000 onlookers hooted and catcalled as Monroe's white dress was blown upwards. Afterward, Dimaggio strong-armed Monroe back to their hotel room to start such an explosive fight, hotel guests and management worried "someone was getting badly hurt." Marilyn's acting coach tried to intervene, but the baseball player drove her away.
The next day, Monroe emerged with bruises all over her shoulders and back, and in order to continue filming, she was caked in makeup. Less than a month later, she ended their 274-day marriage, though the two would rekindle their love shortly before she died in 1962 at just 36 years old. Shattered and alone, Dimaggio—perhaps a beast finally tamed—had flowers delivered to her gravesite thrice weekly for two decades, never to marry again.
Image credit & copyright: CSU Archives/Everett Collection


More about this Curio:
Biography: "Joe DiMaggio at 100: 7 Facts About the Yankee Clipper"
ThoughtCo.: "6 Terribly Tragic Things You Didn’t Know About Marilyn Monroe"
The Guardian: "'That silly little dress': the story behind Marilyn Monroe's iconic scene"