No thanks
Continue
Whoops!
Your free trial of Curious+ has expired
Art Curio
A daily dose of visual culture.
Previous Next
February 17, 2018
1 CQ
Restless dreams 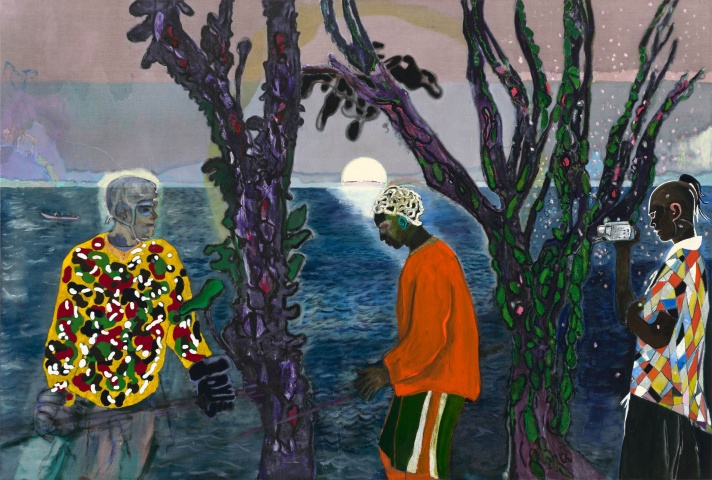 
Something menacing yet indistinct lurks out of sight in Peter Doig's paintings, as if the scene is a snapshot from a fitful dream. In Two Trees, there is a dream-like randomness to the scene: one man unaccountably wears hockey gear, another holds a video camera, and the men stand together but seem lost in their own worlds. Between the two wraith-like trees, which are modeled after ones near Doig's Trinidad home, is a sunset view of the Middle Passage—the route slaves ships once traveled from Africa to the West Indies. "To me, the painting is about being complicit, being involved in something terrible," Doig has said. But to say that the painting is about slavery alone would be simplistic. Doig's work is multilayered—incorporating myth, folklore, and his own rich imagination—and is meant to be pondered. While critics consider him one of the most important figurative painters alive today, his isn't a household name. This seems sure to change as his work draws increasing attention—and head-spinning prices. In 2007, for example, one painting sold for $11.3 million at Sotheby's, astonishing even the artist himself.
An exhibit of new work by Peter Doig recently wrapped up at Michael Werner Gallery in London.
Below: in Red Man (Sings Calypso), a muscled bather poses, oblivious to the struggle between man and snake going on behind him. 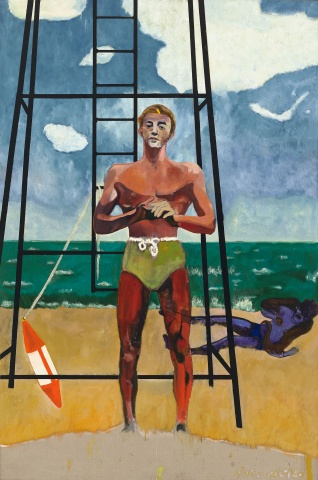