No thanks
Continue
Whoops!
Your free trial of Curious+ has expired
Person, Place, or Thing
Our encyclopedia of the odd and awe-inspiring.
Previous Next
December 4, 2017
1 CQ
Thing: Speakeasy 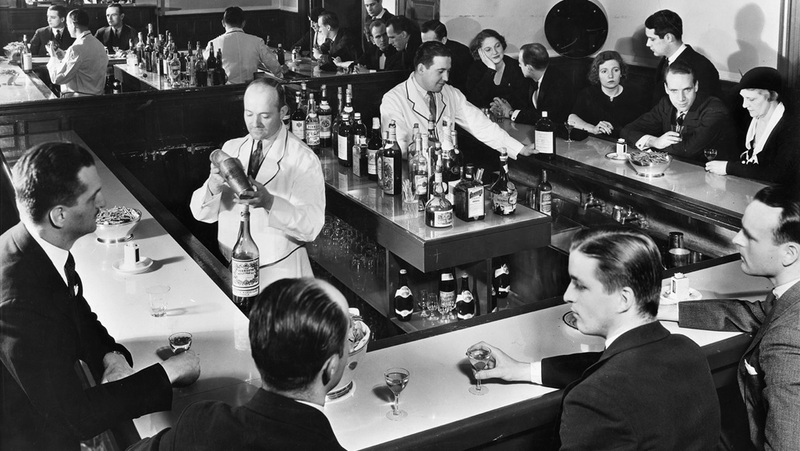 America lets the good times roll—in spite of the illegality.
Psst—the Curio Cabinet sent us. On December 5, 1933, the 21st Amendment finally ended Prohibition laws, which had—to little effect—banned the selling, shipping, and manufacturing of alcohol for over a decade. Since 1920, people had been drinking in illicit establishments called speakeasies, and according to some estimates, for every bar that closed, six speakeasies opened. The reason being: Prohibition never actually banned the consumption of alcohol.
In fact, there was little reason for a healthy, respectful drinker to fear the law during the Prohibition. The only people at risk were the purveyors. But even so, the ban on alcohol created an incredibly profitable market for those willing to take their bars underground and chance trouble with the law.
Across the country, new "bars" opened outside the public eye, be they in dilapidated buildings, or ritzy, multilevel restaurants. New York City's own 21 Club featured two bars, a dance floor, dining rooms, and secret passageways linked to a hidden winery. As rumor has it, these secret bars became known as "speakeasies" because one had to whisper the name of who sent them through a peephole before they were granted entry. By 1925, tens of thousands of these establishments had opened, and in New York City, alone, 30,000!
Though supplying so many drinkers might seem like it would've been a problem, criminals happily made a fortune distributing mass quantities of alcohol. Chicago's Al Capone, for example, made $60 million off of the underground booze trade! But there were plenty of other means of acquiring liquor, too. Since farmers needed alcohol to preserve their fruit, they could sell hard cider on the sly. Physicians could sell liquor prescriptions for $3. Even the Catholic and Jewish communities, who needed wine for Communion and the Sabbath, respectively, acted as conduits for alcohol acquisition. Needless to say, speakeasies were well stocked.
For the average speakeasy drinker, nightlife really didn't change much. If anything, it became more enticing, aside from the poor quality of smuggled alcohol. But even then, the gnarly booze forced bartenders to furiously experiment with mixology to concoct plenty of new cocktails, such as the sidecar. Speakeasy proprietors also pioneered modern finger food practices for cocktail parties, like caviar rolls and lobster canapés. There were dance shows and animals brought in—the works. If anything, when the largely unheeded Prohibition ended, all it really did was give America another reason to share a drink!
Image credit & copyright: Margaret Bourke-White—The LIFE Picture Collection/Getty Images