No thanks
Continue
Whoops!
Your free trial of Curious+ has expired
Person, Place, or Thing
Our encyclopedia of the odd and awe-inspiring.
Previous Next
December 2, 2017
1 CQ
Person: Pablo Escobar 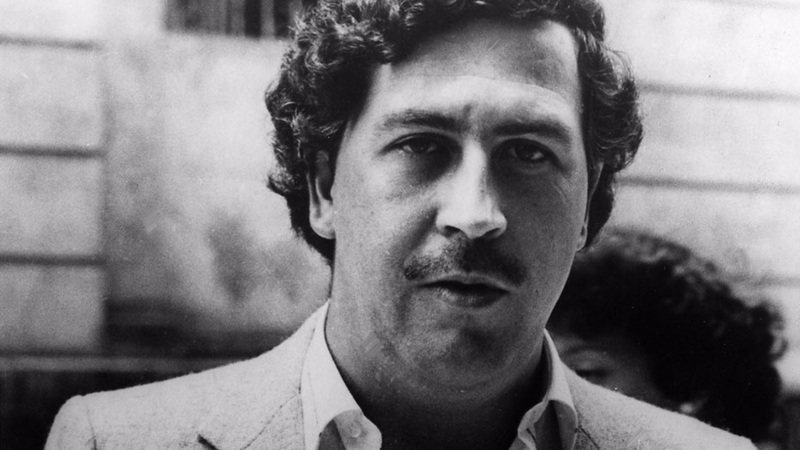 A mustachioed mafia man makes it snow in America.
That's one sinister 'stache. Colombian drug czar, Pablo Escobar—nicknamed the "King of Cocaine"—lead one of the most lucrative criminal organizations in history. Throughout the 1980s, his empire ravaged Colombia and fueled an American drug epidemic that had the DEA scrambling. But of course, Escobar had to face the reckoning.
Escobar was born on December 1, 1949, to a middle-class family in Medellín, Colombia, and dreamt of becoming president. Unfortunately, his aspirations wholly lacked ethics; as the story goes, he began his quest for power by uprooting, sandblasting, and reselling tombstones. Later, he stole cars before discovering the drug trade.
In the '70s, Escobar started smuggling cocaine overseas. He quickly embraced violence as a means of spreading his influence, and by 1980, his hitmen had eliminated competition. With a narcotic monopoly, Escobar was single-handedly supplying the U.S. with 80 percent of its cocaine import.
And the kingpin wanted more: he turned his attention to the government and, in 1982, was elected to Colombia's Congress. Escobar began approaching politicians with an offer of so-called "plata o plomo," meaning silver or lead. He would first issue a handsome bribe, and if they refused, he ordered their and their family's deaths. No one was safe: presidential candidates and even Columbia's Supreme Court Justices were assassinated.
By the mid-'80s, Escobar was listed by Forbes magazine as the seventh richest man in the world. He made $420 million a week, or roughly $22 billion a year. Crisp bills sat in derelict farmhouses, and Escobar lost $2.1 billion a month to rats and mold. With his excess of money, he built schools, parks, and churches for the poor, earning himself the nickname "Robin Hood."
But his philanthropy didn't impress the U.S. government, who applied more and more pressure on Colombia to apprehend him. Eventually, Escobar agreed to be "arrested" in 1991, on the condition he be housed in his own prison, one designed and constructed by him—and fitted with a jacuzzi. He called the prison La Catedral, and from there, he luxuriously directed his empire.
Escobar's relentless escapades caught up with him, though; after torturing people in La Catedral, he was forced to flee across Colombia with authorities at his heels. On this day in 1993, he finally died amid a rooftop shootout in Medellín. It's as the saying goes: do the crime, do the time… and more crime… and a shootout?
Image credit & copyright: AP