No thanks
Continue
Whoops!
Your free trial of Curious+ has expired
Person, Place, or Thing
Our encyclopedia of the odd and awe-inspiring.
Previous Next
November 7, 2017
1 CQ
Thing: Pupusas 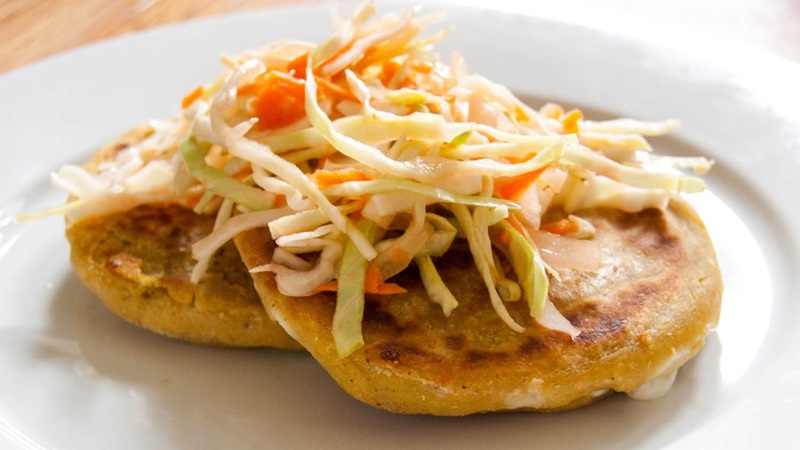 This Salvadoran dish is evolving as fast as it is spreading.
Forget old-fashioned flour power: we're hopping on the maize craze! While pupusas might not yet be a household name stateside, the savory corn-based flatbreads are making their mark in the U.S. And since this Thursday marks the National Day of the Pupusa in El Salvador, we're getting ourselves into the cheese and bean-imbued spirit.
Pupusas are essentially flatbreads made of corn flour, stuffed with one or more of the following: quesillo (Salvadoran cheese), Salvadorian Chicharrón or other meats, squash, and refried beans. Loroco, a vine flower bud native to Central America, is often considered the most crucial ingredient, as it provides the pupusa with a complex, earthy flavor. A common pupusa combo is revuelta: a queso, beans, and meat trifecta.
To make a pupusa, a ground corn dough called masa must first be soaked in an alkaline solution. From there, the dough is rolled into a ball, then shaped into a sort of bowl to accommodate the meat and cheese fillings. Once pregnant with goodness, the ball is then flattened and griddled to succulent, aromatic perfection.
Today, pupusas are a staple of Salvadoran cooking culture, but it wasn't always the case. In fact, before the 1960s, pupusas were primarily isolated to El Salvador's indigenous Pipil tribes, who'd been making them for centuries. Population shifts midway through the 20th century spread pupusas to urban areas and beyond Salvadoran borders; during the Salvadoran Civil War in the '80s, a steady stream of refugees immigrated to the U.S., opening pupuserias.
But of course, we have to ask ourselves how American pupusas stack up to their predecessors. In general, the diameter of Salvadoran pupusas measure one inch smaller than the thicker, flour-packed American ones. Many food critics slam the American habit of building the masa too thick and consequently overpowering the flavor of the fillings. Either way, most aficionados agree pupusas should have a "pillowy" quality. Ooze from ruptures in the masa is unacceptable.
Unfortunately for tradition-oriented critics, we can safely say more and more creative pupusa liberties will be taken stateside. In the footsteps of Italian, Mexican, and Chinese dish experimentation, pupusa Frankensteins are emerging from cooking labs across America. One example is the mozzarella cheese-laden cheeseburger style pupusa. Another features crab meat and shrimp. As much as we want to naysay these om-nom-inations, they're probably delicious!
Image credit & copyright: Lauren Rothman