No thanks
Continue
Whoops!
Your free trial of Curious+ has expired
Person, Place, or Thing
Our encyclopedia of the odd and awe-inspiring.
Previous Next
September 21, 2017
1 CQ
Thing: Oktoberfest 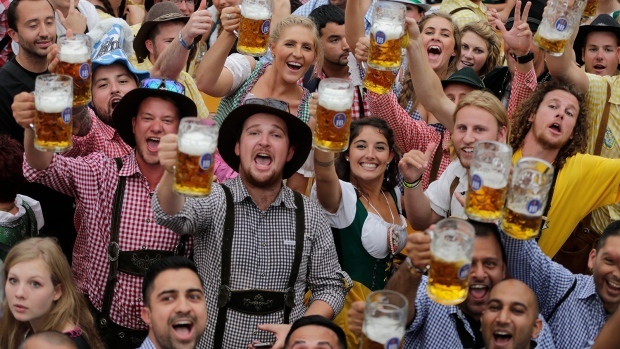 The famous beer bash started out as a royal wedding reception.
Taking place in Munich from mid-September to early October, Oktoberfest isn't just an excuse to don traditional Bavarian garb, like a dirndl skirt or lederhosen, and swill beer. Expecting over six million attendees this year, the largest festival in the world enjoys a storied history: it's a celebration of a royal wedding.
It all started over 200 years ago. On October 12, 1810, the Bavarian royal family invited the citizens of Munich to attend a feast in the fields outside the city: a wedding reception to end all wedding receptions in honor of the marriage of Crown Prince Ludwig and Princess Therese of Saxony-Hildburghausen. The matrimonial bash went on for several blurry days and to this date, Oktoberfest is held on the same fields as this seminal celebration. In fact, the land was later named Theresienwiese, or Theresa's fields, in honor of the bride.
After that, Oktoberfest became an annual tradition. In its infancy, it featured horse racing and an agricultural show; later, a carousel was added, along with other rides. Today, visitors enjoy German specialties, including giant pretzels, bratwurst sausages, and gingerbread, along with parades and scary carnival rides. But the main event is, and always has been, beer, which is served up in giant, brimming steins. Each year, a special brew is concocted exclusively for the festival, and breweries must follow strict rules in the preparation of Oktoberfestbier, as it's called. But before anyone steals sips of brew, the Mayor of Munich must first kick off the celebration by using a large hammer to tap the first keg of beer, to which he or she proclaims, "O'zapft is!" ("It is tapped!")—and Oktoberfest begins.
But like any party, Oktoberfest has faced adversity. A cholera epidemic forced its cancellation in 1854, and it closed during both World Wars. At the 1980 celebration, a bomb exploded, killing 13 people and wounding over 200. The act of right-wing extremism was the second largest terror attack in German history. Yet through thick and thin, Oktoberfest's good times keep on rollin'.
So, if the festivities sound like a blast, but heading to Munich means a transatlantic flight, don't despair; Oktoberfest is now celebrated across the world, and that includes cities all over America. A quick internet search will almost certainly locate a festival nearby. Prost (Cheers)!
Below: The Munich mayor tapping the first keg at a recent Oktoberfest. 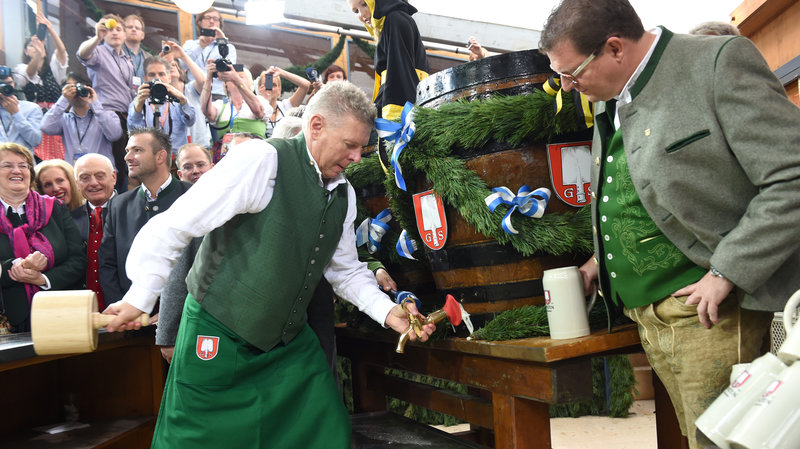