No thanks
Continue
Whoops!
Your free trial of Curious+ has expired
Person, Place, or Thing
Our encyclopedia of the odd and awe-inspiring.
Previous Next
September 24, 2017
1 CQ
Thing: Marathon 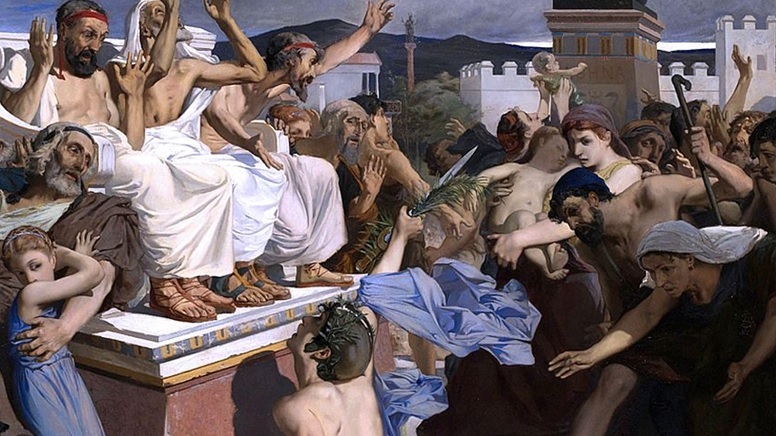 A Greek courier hits "the wall" and keeps running.
Known today as the crazy runs people gloat about completing on social media, marathons are the classic test of one's endurance, psyche—and above all else—lungs. Traditionally, marathons span 26.2 miles in length (specifically: 26 miles and 385 yards, or 42.195 km)—a formidable, if not oddly specific, distance. But there's a reason for the decimal point, and it traces back to one of the greatest battles of all time.
In 490 B.C.E., after conquering most of the Middle East, King Darius of Persia set his sights on Greek city-states that had aided insurrection within his kingdom. He sent an army of 30,000 trained soldiers into the Balkan peninsula, to which the Greek cities of Athens and Paleata could only match with 10,000 citizen-warriors and slaves. Of all cities, war-obsessed Sparta pulled a no-show, so a peeved Greek general despatched a courier named Pheidippides on a 150-mile run from Athens to Sparta in order to beg for their support.
But when Pheidippides spoke to the Spartans, they told him they were in the midst of a passive holiday, and could not be budged. An exhausted Pheidippides ran another 150 miles back to Athens and told his leaders the Spartans would be late, all before donning armor for the ensuing melee with the Persians. The Battle of Marathon lasted roughly three hours, and using a clever phalanx formation, the outnumbered Greeks massacred the Persian army, no thanks to those lazy Spartans who ended up showing a day late.
With the battle won, Pheidippides made a final run of 26-ish miles from the battle to Athens, where at the feet of the city's dignitaries he allegedly spoke "Nikomen," ancient Greek for "We are victorious!" From there, he collapsed and died, having run 326 miles in nine days—not to mention having fought in a battle.
But it wouldn't be until 1896 that the founder of the International Olympic Committee, Pierre de Coubertin, held the first official marathon at the first modern Olympic games. The race was a direct homage to the struggle of Pheidippides, beginning at the Marathon Bridge and ending at the Olympic Stadium in Athens. Of the 25 runners, only nine finished—a far cry from today, where 425,000 amateur runners annually complete marathons in America alone. Across the globe, there are now 500 organized marathons in 64 countries, so there's no shortage of the calf-aching, heart-palpitating, lung-burning… fun?


More about this Curio:
Forbes: "September 12, 490 BCE: Remembering The Battle of Marathon On The 2,506th Anniversary"
Livescience: "Why Are Marathons 26.2 Miles Long?"
The New Yorker: "Crossing the line"
History: "Battle of Marathon"