No thanks
Continue
Whoops!
Your free trial of Curious+ has expired
Person, Place, or Thing
Our encyclopedia of the odd and awe-inspiring.
Previous Next
August 20, 2017
1 CQ
Thing: Voyager 1 and 2 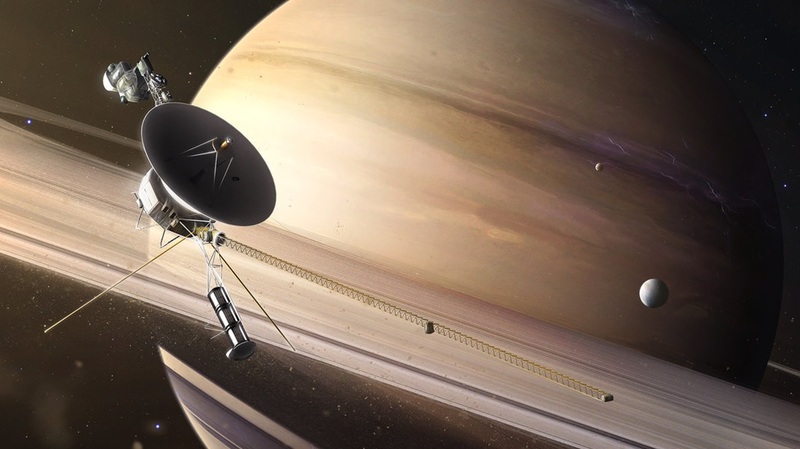 Meet the two probes trailblazing our understanding of the solar system.
Two legends from our middle school science textbooks were launched 40 years ago today from Cape Canaveral: Voyager 1 and 2. The numerous discoveries by the far-out duo have since revolutionized our understanding of planetary science. What's more, they're still trucking; in 2012, Voyager 1 became the first man-made object to enter interstellar space!
The two vessels were originally designed to study "nearby" planetary wonders, like the moons of Jupiter and the rings of Saturn. NASA fitted each Voyager with a plutonium-powered battery and its very own golden record—a 12" gold-plated record designed to teach extraterrestrials about Earth's languages and cultures, much like the Rosetta Stone, should any of them find it. Both of the Voyagers experienced precarious launches, with Voyager 1 leaking fuel and Voyager 2 momentarily confusing its navigation system. Regardless, they managed to enter space.
When they reached Jupiter, the Voyagers studied the moon Io, discovering the first known volcanic activity outside Earth's. As for Saturn, the probes' cameras revealed disunity among the gas giant's brilliant rings, with ice and fine debris spaced between them. Since the probes spent most of their fuel reaching Jupiter, NASA utilized the gravity of each planet to slingshot the Voyagers to the next one. In the case of Jupiter, the transfer of inertia to the probe actually caused the behemoth planet's orbit to slow by a trillionth of a mile per hour.
With the aide of the planets' compounding gravities, the Voyagers now race at speeds of 38,000 miles per hour, with Voyager 1 just a few years ahead of its twin. Although Voyager 2 is still in the heliopause boundary, the area between the sun's solar winds and interstellar space, it's expected to enter the great, black void in short time. At this point, Voyager 1 is roughly 13 billion miles from the Earth, with Voyager 2 trailing at 10.6 billion miles. Radio waves from the probes take 17 hours to reach NASA over the Deep Space Network, the most expansive scientific telecommunications system in the world. Both of the probes continue to adeptly execute their missions, but sadly, their batteries are projected to fade by 2025. Don't fret; the Voyagers might no longer be able to transmit their findings when that date comes, but that doesn't mean their adventures are ending anytime soon!
Image credit & copyright: MacRebisz