No thanks
Continue
Whoops!
Your free trial of Curious+ has expired
Person, Place, or Thing
Our encyclopedia of the odd and awe-inspiring.
Previous Next
August 16, 2017
1 CQ
Thing: The fortune cookie 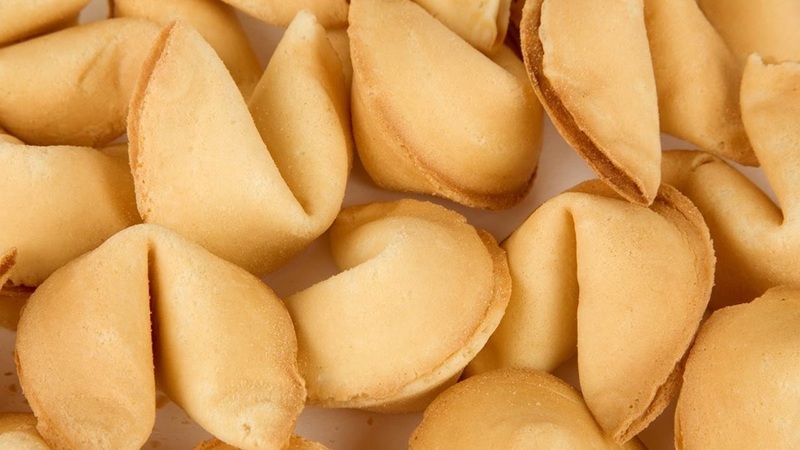 The reason restaurants in China don't serve fortune cookies.
There will be a great Curio in the near future, if we may say so ourselves. At Chinese restaurants in America, it's customary to conclude dinner by breaking open a cleft butter cracker before reading the tell-all fortune inside. But lo and behold, fortune cookies are withholding a secret: they're almost certainly from Japan. Born on this day in 1854, Japanese-American immigrant Makoto Hagiwara purportedly invented the prophetic pastries at the turn of the 20th century. Since then, the wise little wafers have become an American phenomenon.
As official caretaker of the Japanese Tea Gardens in San Francisco, Hagiwara first served fortune cookies between 1907 and 1914. These proto-cookies were made of rice cake and contained thank yous instead of fortunes. The treat became popular in Asian communities along the coast of California, and when Japanese civilians were wrongfully interned in camps during World War II, Chinese restaurants filled the market with their own take on the cookies. Around this time, the messages within the treats became the popular Confucian fortunes. So, when veterans returned from Californian ports to their homes inland, they couldn't help but wonder why their local Chinese restaurants didn't serve them. Since the customer's always right, Chinese restaurants soon adopted fortune cookies nationwide.
In Japan, the fortune cookie's distant cousin is known as tsujiura senbei, or "fortune crackers." Bakers fire these crackers on small grills called kata, and flavor the treats with miso and sesame, whereas vanilla and butter constitutes our sweeter western cookies. Although factories now manufacture the American cookies en mass, the technique retains the basics of the kata process; and no, there aren't machines that write the fortunes within cookies from the outside in, like old men building ships inside bottles. The dough is first flattened into a circle and baked; before the dough hardens, the baker inserts the fortune and folds the cookie into its iconic shape. Voilà!
Nowadays, Wonton Food, Inc. is the world's largest fortune cookie producer, shipping around five million cookies a day. Like Justin with the Daily Curios, some of Wonton Food's high-ups compose fortunes with a team of writers. Hmm, maybe the cabinet could try its luck at writing some fortunes? How about this one: Remain ever optimistic, for there appears to be a CQ point on the horizon!
Image credit & copyright: Today