No thanks
Continue
Whoops!
Your free trial of Curious+ has expired
Person, Place, or Thing
Our encyclopedia of the odd and awe-inspiring.
Previous Next
July 9, 2017
1 CQ
Thing: The Enigma machine 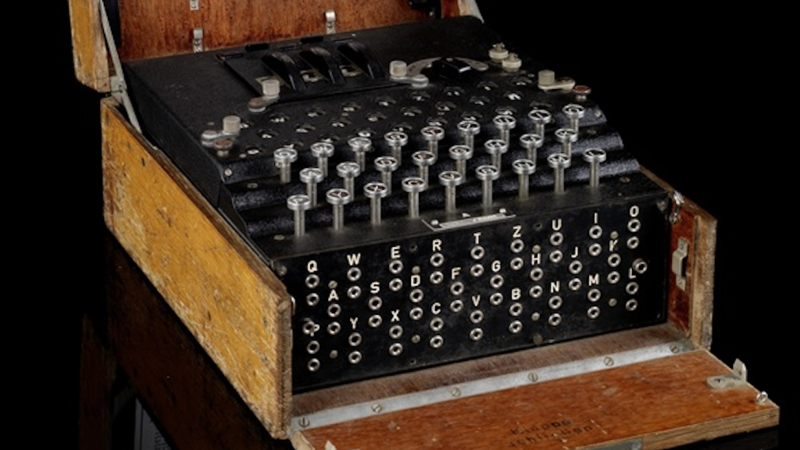 How Nazi Germany's "unbreakable code" machine spurred the digital age.
On this day in 1941, British cryptologists hacked the logic system used by Germany's Enigma Machine, sending vital information about Nazi stratagem to the embattled Soviets. Like the invention of radar, Germany's infiltrated message scrambler would play a huge factor in World War II, and ultimately push technology into a new age.
The Enigma machine was originally invented by Dutchman Hugo Koch for commercial industry, but the German Navy had co-opted the machine for its own use in the 1930s. The machine worked by scrambling messages. Each time a letter was hit on its keyboard, a signal passed through a circuit, ran through a plugboard, turned rotors, bounced off reflectors, and came back again with one of over 17,000 random combinations that produced a different letter. For example, if the operator entered a 'q', a 'q' would never result from the machine. This produced a garbled message that was sent via Morse code to the receiving operator, whose own Enigma machine was linked to the sender's. The receiving operator entered the garbled Morse code into their Enigma machine, and the machine regurgitated the original, coherent message.
The Germans long thought their Enigma machine to be unbreakable. But unbeknownst to them, French espionage allowed the Polish to produce their own variant, which they dispatched to Britain as the Germans swept Poland. The British then set up a school for ciphertext, or coded language, and developed a machine called the Bombe to eliminate implausible key outcomes for the Enigma messages. The Bombe ran algorithms that eliminated thousands and thousands of possibilities, so the codebreakers at the school could better allocate their resources.
By lending each other a helping hand, the Allies were able to predict much of Germany's troop placements and strategies—certainly a factor in their subsequent victory. But not to be forgotten, German high command's constant paranoia drove themselves to ever complexify their Enigmas, forcing the Allies to build more and more complex algorithm machines. When the Germans eventually upgraded to the Lorenz Enigma machine, the Allies produced Colossus—the world's first digital programmable computer!
Image credit & copyright: The History Blog


More about this Curio:
History: "Enigma key broken"
BBC: "Enigma"
PBS: "How the Enigma Works"
The Guardian: "How did the Enigma machine work?"