No thanks
Continue
Whoops!
Your free trial of Curious+ has expired
Person, Place, or Thing
Our encyclopedia of the odd and awe-inspiring.
Previous Next
July 2, 2017
1 CQ
Person: Thurgood Marshall 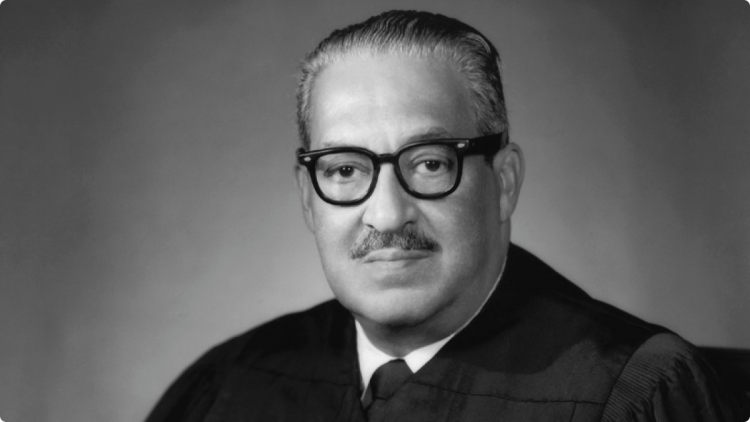 The first African-American Supreme Court justice's long fight for civil rights.
Is justice really blind? Because up until 50 years ago, the U.S. Supreme Court had only ever been staffed by white men of European descent. No matter your tolerance for coincidences, it has been a relief to the shady history of America's highest court that Thurgood Marshall accepted a justiceship there in 1967.
Born on this day in 1908, Thurgood Marshall's career in law started by pushing up against racist policies. He wasn't allowed attend his hometown university because of its segregation policy, so he ended up at Howard University, one of the most prestigious historically-black institutions of higher learning. There he became actively involved in civil rights with the local NAACP chapter. He graduated first in his class, and one of his early successes in court challenged segregation policies at universities in Murray v. Pearson.
At the age of 32, Marshall became the executive director of the NAACP Legal Defense and Education Fund. During his tenure there, Marshall argued 32 cases in front of the U.S. Supreme Court, and won 29 of them. Some of his landmark cases included Smith v. Allwright, where excluding African-American voters from primary elections was deemed unconstitutional, and Shelley v. Kraemer, where restricting possession of property by race could no longer be enforced by the courts. His most famous case was Brown v. Board of Education, which effectively ended segregation practices in public schools.
In 1960, Marshall was invited to Kenya to help draft a new constitution for the country. In his blueprint, Marshall centralized equality under the law, the right to vote, as well as rights to education, health and welfare, and a right to work. His outline was not adopted by the new Kenyan government, but even as a Supreme Court Justice, he had fond memories of his trip to the country. One of his most prized possessions was a monkey-skin cloak given to him as a gift when he was made an honorary Kenyan chief during his stay.
Marshall's appointment to the Supreme Court in 1967 made him the first African-American Justice. While on the court, he lost none of his flair for defending civil rights and civil liberties. He would also maintain an air of informality in the highest court, often greeting Chief Justice Burger with a "What's shakin', Chief baby?" Marshall's quick wit could often be frustrating to his fellow justices who would argue the constitutional merits of a case while he reminded them of the practical injustices at hand. In his later years, Marshall was noted to have disliked the conservative nature of the court, and he retired from his position in 1991.
When he passed away in 1993, Thurgood Marshall's legacy was memorialized with a statue of his likeness near the Maryland State House, and President Clinton honored him with a Presidential Medal of Freedom that same year. Thurgood Marshall's tireless work in the courts places him squarely in the role of one of the most important figures in the fight for civil rights.