No thanks
Continue
Whoops!
Your free trial of Curious+ has expired
Person, Place, or Thing
Our encyclopedia of the odd and awe-inspiring.
Previous Next
June 11, 2017
1 CQ
Person: George Willig 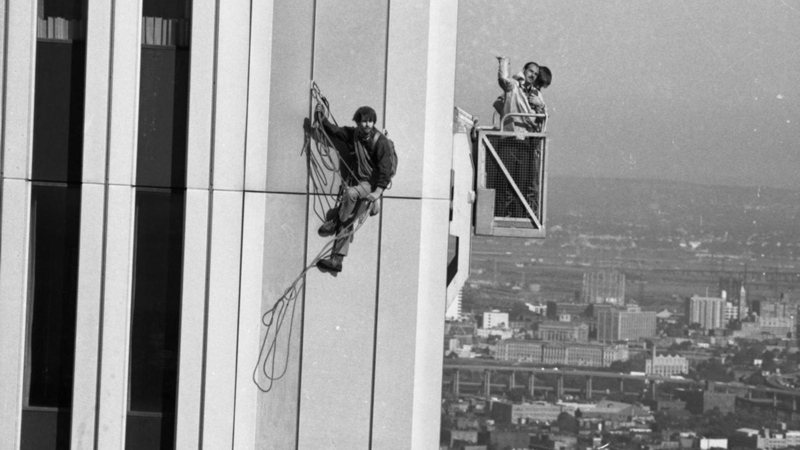 The toy designer who scaled the World Trade Center in 1977.
Wanna take the elevator up? The stairs? Neither…? 40 years ago today, a 27-year-old toy designer named George Willig rigged himself to the World Trade Center's South Tower with home-made clamps and began climbing—and climbing. A window washer sighted Willig when he was just 30 feet off the ground, but by then Willig was out of reach and eyeing the skyscraper's 110th floor.
Willig spoke to his friends for a year about wishing to climb the World Trade Center, and no surprise here—they told him the idea was crazy. But the thought of hanging from the tower gave him a mighty adrenaline rush. He'd climbed somewhere between 30 to 40 mountains in recent years, and yearned for something more.
He put his skills as a toy designer to use, and boy did he have skills. He investigated the vertical window-washing channels that ran down the towers and constructed several prototypes to provide a safe hold for a climb. The climbing devices were block-like clamps each capable of supporting 2,000 pounds. With one block clamped into a channel, he could freely position the other into a different channel. Traditional climbing gear, such as carabiners and rope, would suspend him from the clamps.
Willig snuck to the South Tower wall at 6:30 a.m. on June 11th. A maintenance man strolled by as he hooked up the climbing rig, unconcerned. 30 feet up the face of the tower, Port Authority guards finally took notice of Willig. Crowds of people gathered at the base of the tower, but shrank into specks as Willig climbed higher and higher. Winds reached 20 knots and the tower swayed three feet both ways. At the 60th floor, two cops lowered from the roof to grab onto Willig, but he maneuvered outside their reach. Willig treated his climb, in his words, as "fait accompli." The phrase is Latin for "something accomplished and irreversible"—talk about confidence.
After three and a half hours of climbing, Willig pulled himself onto the roof of the South Tower. Before the cops cuffed him, they swarmed him for autographs and congratulations. At the base of the tower, crowds cheered for New York City's newest folk hero as he entered a squad car. The city initially sued Willig for $250,000, but took such a liking to him they lowered the fine to $1.10 a month later—a penny for each floor of the tower!
Image credit & copyright: Jim Hughes, New York Daily News