No thanks
Continue
Whoops!
Your free trial of Curious+ has expired
Person, Place, or Thing
Our encyclopedia of the odd and awe-inspiring.
Previous Next
April 18, 2017
1 CQ
Person: Paul Revere 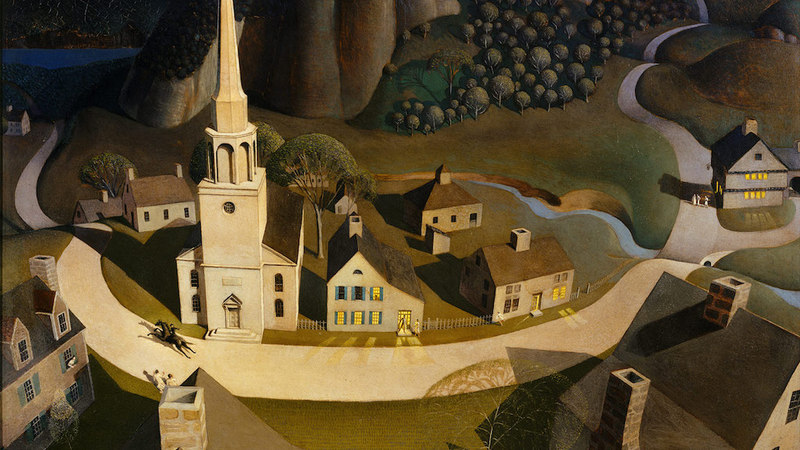 The real story of the revolutionary midnight rider.
"Listen, my children, and you shall hear / Of the midnight ride of Paul Revere, / On the eighteenth of April, in Seventy-Five"… stop us if you've heard that one before. The opening lines of "Paul Revere's Ride" by Henry Wadsworth Longfellow, describing the events leading up to the first battle of the Revolutionary War, are among the most memorized in American poetry. Longfellow got the name and date right, but not much else.
On this day in 1775, political activist Dr. James Warren enlisted Revere—a Boston-based silversmith, moonlighting as a courier—to deliver a message to an outpost in nearby Lexington, warning that British troops were descending upon the revolutionaries' weapon stockpiles. Along with another rider by the name of William Dawes, Revere set out around 10 P.M., not midnight, to complete the 11-mile ride—without stopping to check the signal-lights at the North Church tower, as the poem goes, for "one if by land, two if by sea." (Revere came up with the idea of using lights to signal the British troops' route, but he didn't end up using it to get out of Boston.)
Along the way, Revere and Dawes did not yell "The British are coming!", as folklore claims, because that wouldn't have been very smart. British troops lined the countryside at the time, so the oft-repeated line would have been an open invitation for arrest. (To Longfellow's credit, this myth wasn't included in his poem.)
When the two riders successfully delivered their message to Lexington, they picked up another alarm rider, Samuel Prescott, before setting out on their final leg to Concord. This part of the journey was not as successful. The riders only got as far as Lincoln, about five miles away from Lexington, before being stopped by British soldiers, interrogated, and escorted back to town.
Revere was successful insofar as his ride, along with many others', helped spread the news of the impending military conflicts. On April 19, the Battles of Lexington and Concord broke out and proved the American soldiers were no pushovers. But the remainder of Revere's service to the Revolution was not as glorious. He went on to serve as a lieutenant colonel, most well-known for leading a poorly-coordinated charge on British soldiers—an event which would later have him court-martialed.
The conclusion of "Paul Revere's Ride" moves to cement the man's legacy: "Through all our history, to the last, / In the hour of darkness and peril and need, / The people will waken and listen to hear / The hurrying hoof-beat of that steed, / And the midnight-message of Paul Revere." But just how important was that message, in particular, Mr. Longfellow? We're not all that clear.