No thanks
Continue
Whoops!
Your free trial of Curious+ has expired
Person, Place, or Thing
Our encyclopedia of the odd and awe-inspiring.
Previous Next
April 6, 2017
1 CQ
Thing: Roland TR-808 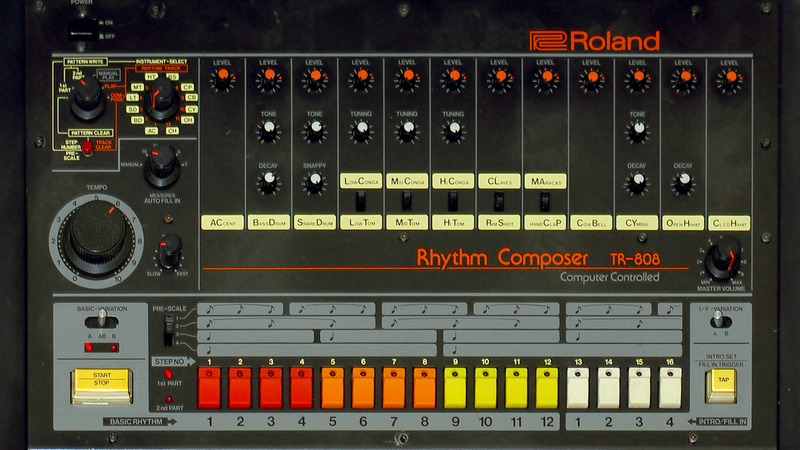 The most influential drum machine of all time.
It's an indispensable piece of any modern recording studio, despite the fact that its technology is over 30 years old and the sounds it makes have been described alternatively as "cheesy" and "unrealistic." There's nothing quite like the Roland TR-808 drum machine.
When it was released in 1980, many critics and consumers took a hard pass. The 808's user-friendly interface and customizability were appealing, but not enough to ignore its wacky approximations of hi-hats, snares, and cowbells. Producers were more drawn to the Linn LM-1, another drum machine released in 1980 featuring more realistic sounds.
The 808 also had some early adopters, notably Afrika Bambaataa (Planet Rock) and Marvin Gaye (Sexual Healing). The affordable price undoubtedly added to its appeal; an 808 cost one-fourth as much as an LM-1. Nevertheless, Roland chose to shut down production in 1983 after making just 12,000 units.
That didn't stop people from using it, though. The 808 found use with burgeoning hip-hop acts like Sir Mix-a-Lot and Public Enemy, and soon enough, all kinds of artists were getting in on the action—from Whitney Houston (I Wanna Dance with Somebody) to Phil Collins (One More Night).
25 years later, the original line of '80s machines still can be heard in popular music. Trap, a genre dominating rap charts, thanks to artists like Future and Migos, is defined by the 808's hi-hat sound. Roland has tried to capitalize on its old product by releasing an updated version, the TR-8, but critics say it isn't truly faithful to the original sound.
There may be something to that notion: Ikutaro Kakehashi, the inventor of the 808 who passed away last week, insisted the original machines had a built-in hardware problem. Defective transistors connected the circuits, giving the 808 its signature sound; by the time Roland stopped production, they were no longer being manufactured. Given the 808's contradictory legacy, we're not surprised that its secret ingredient is that it was broken all along.

More about this Curio:
IO808: "Play Online"
Synthmuseum.com: "Roland TR-808"
The Guardian: "The Roland TR-808: the drum machine that revolutionised music"
Rolling Stone: "8 Ways the 808 Drum Machine Changed Pop Music"
FACT: "Everything you ever wanted to know about the Roland TR-808 but were afraid to ask"
The New Yorker: "The 808 Heard Round the World"